The Bosse Ion Cloud takes the already state-of-the-art Bosse Acoustic Pods and Room-in-Room Systems to the next level of health and wellbeing. 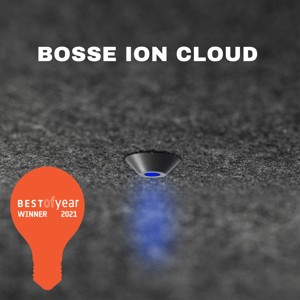 The positive power of negative ions

If you recently had a medical lab test, then you know that sometimes a “positive” result can be a negative thing. So, it goes with ions.

Ions that have been positively charged are the bad guys with a molecular composition that has been impacted by pollutants, pollens and pathogens. Electric devices, air conditioning, heated air, smog/emissions, pesticides, formaldehyde, fluorescent lamps, cigarette smoke and x-rays contribute positive ions to the atmosphere. Compounded with large numbers of these “positive” ions in the air, our bodies and minds can suffer adverse side effects.

Conversely, negative ions are the superheroes. Naturally generated in our environment by plant life, ocean waves and waterfalls, these negative ions adhere to the positive ions and neutralize them. The negative ions “clear the air”, by deactivating pathogens and pollutant particles and rendering them harmless. Over 50 years of research studies prove what humans have instinctively known for centuries—the positive effects of negative ions. That is why a vacation near the sea or in the mountains is rejuvenating and why a walk on the beach or in the woods can be so invigorating.

With limited ways of acquiring the “good” negative ions, our interior environments are often packed with the “bad “positive ions.

With limited ways of acquiring the “good” negative ions, our interior environments are often packed with the “bad “positive ions. And while, at this time, we may be more concerned about pathogens like bacteria and viruses in our homes and workplaces, there are other unwanted side effects to avoid like a lack of energy or inability to focus.

How many Ions does it take to…?

A walk in “country air” provides 16.4k to 32.8k negative ions per cubic inch, this range is thought to be the minimum requirement for a “healthier” environment. Take a trip to the mountains or the beach and the exposure to negative ions will range from 16.4k to 98.3k per cubic inch.

A single Bosse Ion Cloud head can introduce up to 960 million negative ions per cubic inch.

The Ion Cloud negative ions are invisible, and the device is quiet and unobtrusive. Ion Cloud heads, on the ceiling of the enclosure, emit a subtle blue light when activated.  Please note that the image above has been altered to show the emission of air, but in actuality, the Ion Cloud is not visible.

The Bosse Ionizer device is available with any of the Bosse Acoustic Pods and Room-in-Rooms and can also be retrofitted to some already installed Dauphin models.

Please note that as the size of the acoustic space increases, more ion-cloud heads will be needed to accommodate the space and ensure even distribution of the negative ions throughout the air.

What are the overall benefits of negative ions?

Negative ions improve air quality on a microscopic level by:

Deactivating pathogens, including viruses
Neutralizing bacteria, fungus and spores
Reducing carcinogenic hydrocarbons in the air by 75%
Increasing oxygen intake in the blood.

The purified air can provide the following benefits to health:

The purified air can provide the following beneficial effects on the mind:

The COVID-19 pandemic has moved the importance of air quality to the front of the line in office settings.

How Mass Timber is Becoming a New Reality in Interior Design

The benefits of mass timber over synthetic materials in interior design and construction.

Why many contractors can’t make the switch to green construction despite concerns about global warming.

Be the first to know about new design solutions,  industry trends and news from Dauphin.